FHFA VIOLATES LAW FROM DAY ONE OF CONSERVATORSHIP


The Financial Safety and Soundness Act of 1992 (FSSA) established the Office of Federal Housing Enterprise Oversight (OFHEO), predecessor of the current Federal Housing Finance Agency (FHFA) and it regulates not only Fannie Mae and Freddie Mac, but also the 12 Federal Home Loan Banks (FHLBs comprised for thousands of Community Banks) that are also Government-Sponsored Enterprises (GSEs).

Fannie Mae and Freddie Mac still abide by the Financial Safety and Soundness Act of 1992. In July 2008, the Housing Economy Recovery Act (HERA) was enacted for the purpose to amend some aspects of the previous Law, but for the rest, the FSSA is still in place. In fact, if you read now the FSSA, the amendments approved in HERA are included.
For instance, one amendment of HERA was to change the name of the Act for Federal Housing Enterprises Financial Safety and Soundness Act of 1992 (see SEC. 1142). Or change the name "Enterprise" for "regulated entity".


Since the day the Enterprises were put into Conservatorship, there have been a series of agreements between the FHFA and Treasury that have erased their Capital massively, and this is prohibited by Law because HERA (and thus FSSA) explicitly says that the Director shall ensure the maintenance of adequate capital.

HERA. SEC. 1313. DUTIES AND AUTHORITIES OF DIRECTOR.
‘‘(a) DUTIES.—
‘‘(1) PRINCIPAL DUTIES.—The principal duties of the Director shall be—
‘‘(B) to ensure that—
‘‘(i) each regulated entity operates in a safe and sound manner, including maintenance of adequate capital and internal control

Therefore, all the agreements between the FHFA and the Treasury or Congress’ actions that have erased a substantial amount of capital from the Enterprises should be deemed voided effective the day they were approved. This is what the FHFA's Director should have done in order to abide by his duties under Law.

1. The Treasury purchased $1 billion worth of Senior Preferred Stock in each Enterprise the day of Conservatorship, without disbursing the cash, that is, for free, and the justification was: "Initial Commitment Fee". But the reason has more to do with the need to place the Enterprises under Conservatorship, because it reduced the Core Capital by the same amount.

3. The day of Conservatorship the Enterprises agreed to pay a usurer 10% dividend to Treasury, but their Congressional Charters already contemplated a bailout scheme that is the central piece of the GSEs: Charter. SECTION 305 (c):

Each purchase of obligations by the Secretary of the Treasury under this subsection shall be upon terms and conditions established to yield a rate of return determined by the Secretary to be appropriate, taking into consideration the current average rate on outstanding marketable obligations of the United States as of the last day of the month preceding the making of the purchase.

And the 2 year Treasury note stayed at 0.3% - 0.4% annual rate since long time ago. Thanks to this bailout scheme the enterprises get funds on the market at low rates so that they can fulfill their Countercyclical role.

4. The establishment of a deferred tax asset valuation allowance, reduced capital by $21 billion for Fannie Mae and $14 billion for Freddie Mac in 2008, also contributed to the total capital erosion. Later the enterprises were allowed to build a DTA, but due to the Net Worth Sweep that will be explained next, the Enterprises didn’t benefit from these DTA.

5. Temporary Payroll Tax Cut Continuation Act of 2011 requires the FHFA to direct the Enterprises to raise the g-fees but the proceeds are sent to Treasury. This action violates FnF’s Congressional Charters: "no fee or charge may be assessed or collected by the United States".

It also violates the FSSA that prohibits to distribute Capital, and those revenues go directly to earnings (TIER 1 Capital).


6. Net Worth Sweep since April 2012. The Net Worth amount is assets less liabilities. The amount remitted to Treasury each quarter as dividend is all the profits, calculated: Net Worth amount less the Applicable Capital Reserve amount ($600 million for 2017).
It's stunning that a government doesn't allow to build capital above $600 million.
Under this 2012 Third Amendment of the Agreement with Treasury (SPSPA), the Applicable Capital Reserve started at $3 billion for 2013, but it was set that it will be reduced by an equal amount until $0 for 2018. Therefore the FHFA sets a lower Capital Reserve target each year until it reaches zero in 2018, which is the opposite of what the Law requires (Capital Restoration Plan).
The NWS also violates the Charters for the same reason laid out with the Temporary Payroll TCCA mentioned before.

7. During Conservatorship, FnF have been issuing 30yr. callable zero coupon bonds, that soon later have been redeemed at an outstanding high rate of return. Explained here.

8. Credit Risk Transfer transactions to reduce credit risk. FnF waive revenues (and thus, earnings) when they initiated in 2013 the credit risk transfers program because, in FHFA’s Director’s own words: “Like any kind of insurance, the Enterprises must either pay a premium or forgo a portion of their guarantee fee income”.

But their Congressional Charter doesn’t allow them to pay a fee for insurance, but to engage in operations with mortgages or interest therein.

Again, FHFA can take any action but it can’t contravene the FHEFSSA of 1992 and their Charter because both are currently in force.

Even in the same speech at American Mortgage Conference, FHFA’s Watt recognizes he isn’t complying with FnF's business model written in the Charter, which is an unlawful act: “The Enterprises' credit risk transfer programs are a significant departure from their prior business model”.

Also, it can be deemed Capital distribution (Earnings is Capital) which is prohibited for undercapitalized GSEs according to the Law of 1992.

Finally, it’s worth mentioning that this Credit Risk Transfers program doesn’t make economic sense, because they are implemented to mortgage loans with maximum Loan-To-Value of 80%, which are the only loans that FnF can buy according to their Charter. The loan needs to have mortgage insurance (bought by the borrowers and paid for in their monthly payments) for loans with LTV higher than 80%. And covering the credit risk of loans with 80% LTV ratio is insane because they have a very low credit risk already, which translates into very low Serious Delinquency rates.
For instance, Freddie Mac signaled in its latest report that the Serious Delinquency rate for its Core single-family book (74% of portfolio) is just 0.19%, a disproportionately low rate compared with the financial sector. 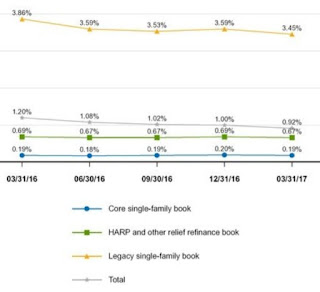 9. Sale of reperforming modified loans. They are sold with a haircut because the buyer is obliged to offer loss mitigation options to any borrower who may redefault, therefore, the buyers aren’t paying the Unpaid Principal Balance for sure. It could be a backdoor mortgage debt forgiveness plan.

Finally, it’s worth mentioning another section of FSSA. It requires the FHFA to establish CAPITAL CLASSIFICATIONS (SEC. 1142), and guess what the FHFA did when Conservatorship began: it suspended the capital classification disclosure for Fannie Mae and Freddie Mac.

This is because HERA requires Prompt Corrective Actions (Subtitle C. Page 77) amending The Financial Safety and Soundness Act of 1992 (12 U.S.C. 4613), and if we don't know the Capital Classification of FnF, there won't be pressure to approve Capital Restoration plans.

As always, everything is set forth in the Federal Housing Enterprises Financial Safety and Soundness Act of 1992:
FIRST. It’s established the Minimum Capital Levels for the Enterprises: 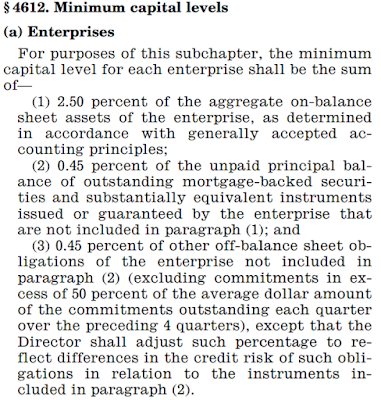 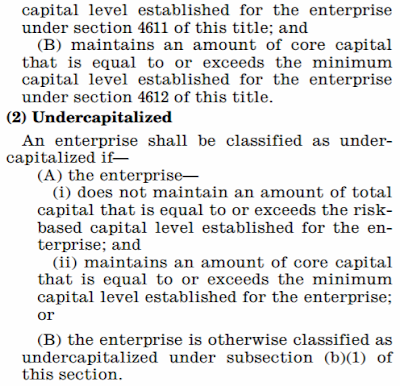 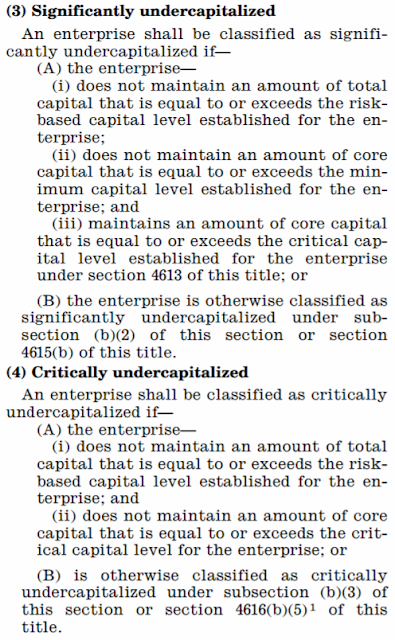 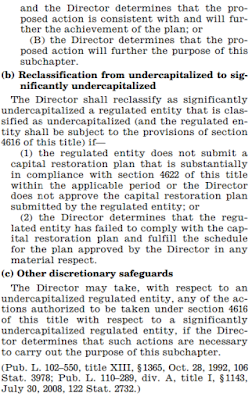 The FHFA's Directors neither read the Federal Housing Enterprises Financial Safety and Soundness Act of 1992, nor the Enterprises' Congressional Charters, because they preferred to embark in a campaign of Capital Erosion, so that the Conservatorship continues forever and, in the meantime, banks, hedge-funds and the government make a lot of money off transactions using FnF's balance-sheet.

Unlike with FnF, the FHFA required the FHLBs classified as undercapitalized to submit a capital restoration plan for approval, execute the approved plan, suspend dividend payments and excess stock redemptions or repurchases, and didn't permit growth of its average total assets in any calendar quarter beyond the average total assets of the preceding quarter, unless otherwise approved by the FHFA.

Maybe the FHFA and the Treasury thought that, because in HERA is only explained the Prompt Corrective Actions for the FHLBs, people would think that Fannie Mae and Freddie Mac are left apart. This is why many people close to the Hedge-funds and banks repeat continuously that FnF are under HERA, but they are not. What HERA did is just amend the Financial Safety and Soundness Act of 1992, therefore FnF are still under FSSA which sets forth the capital classifications and urges the FHFA to take measures to restore adequate capital levels in order to allow the Enterprises to operate in a safe and sound manner.

The FHFA violates the Federal Housing Enterprises Financial Safety and Soundness Act of 1992 because it has agreed or it hasn’t opposed to all the capital erosion actions we've seen since Conservatorship began and, secondly, because it hasn’t directed the Enterprises to take measures to have adequate capital.

FnF's common shareholders reserve the right to sue the FHFA and the U.S. government for the harm suffered.

Popular posts from this blog

July 08, 2019
According to 2008 HERA, Capital Distributions (like dividends) are restricted for Undercapitalized enterprises. But there are exceptions where they are authorized: if it's in connection with the "purchase of ownership interest" (the SPS are Equity) and it will "reduce the obligations" (the SPS are obligations). In July 2011, when it was clear that FnF would become profitable soon (the losses were driven by the provision set aside for loan modifications and their portfolios were almost fully reserved) and thus, the SPS would be paid back soon (I estimate they were paid back in 2013 for FMCC and 2014 in the case of FNMA), the FHFA, with the excuse of writing regulation to be more transparent about what is set forth in HERA, added one important exception more that would allow FnF to continue paying dividends to the Equity holders: "to meet their Risk-Based Capital levels", that is, for their recapitalization. The Administration's narrative has been …
5 comments
Read more

June 09, 2018
Capital Distributions are restricted while in Conservatorship, according to 2008 HERA, where is set forth the regulation. The FHFA has repeated this several times, although referring to payments of claims, etc. But a dividend is also a Capital Distribution.

It doesn't matter what is written in the SPSPA signed between the FHFA/US Treasury, because a contract doesn't supersede a law in force.
Distributing dividend would go against Established Insolvency Principles and common sense. The companies need to increase capital and not decrease it, retaining earnings and not distributing it.
The FHFA has allowed to distribute Capital only to one holder of Equity interest, the holder of Senior Preferred Stocks. Why is that?
It turns out that distributing capital to the US Treasury both recapitalizes the enterprises (to be in a solvent condition) and pays off the obligations with the Treasury (to be in a sound condition), which is exactly the Conservator's Power:
If you have any do…
7 comments
Read more

TARGET2 IS A PAYMENT SYSTEM OF UNPAID BILLS IN THE EUROZONE

September 06, 2018
In Spain we know it well. Every time there's a switch of political parties in any Administration (Municipal, Regional or Central State) and the opposition party takes over the helm, the news about unpaid bills emerge. It's commonly known as "bills hidden in the drawer". So, a new Administration starts its mandate with the coffers in negative territory. This causes many troubles to the private contractors working for the Administrations because their bills are due during months or years. But the authorities in the Eurozone have come up with a brilliant idea. Let's use the Central Banks to advance the payments to the creditors using the money printing press but, as the new bank notes in circulation would show up in the statistics provoking depreciation of the currency and thus, inflation, it's better to conceal it issuing Book Money, which is not legal tender and therefore, it cannot show up in any statistic. In my previous article a talked widely about this n…
4 comments
Read more